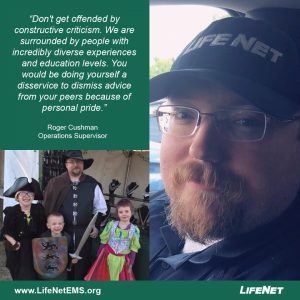 Roger has been part of the LifeNet family in Stillwater, Oklahoma since 2017. He currently serves as an Operations Supervisor in the Division.

“I have had a fascination with EMS since I was a kid, ever since my hometown ambulance service saved my life after I was involved in a pretty bad lawnmower accident. I originally became an EMT so that I could serve my community on that same volunteer ambulance service,” Roger said, as he described why he picked EMS for his career path.

Roger enjoys the continuing education aspect of working in EMS.

“No matter how long you’ve been in EMS or how educated you are, you can always learn something new if you keep an open mind,” he said.

He also appreciates the “amazing camaraderie among peers and management alike at LifeNet that you just don’t get to experience anywhere else. Management, and the company as a whole, care deeply about every individual employee’s morale and professional growth.”

For others considering a career in EMS, Roger offers this advice: “Don’t get offended by constructive criticism. We are surrounded by people with incredibly diverse experiences and education levels. You would be doing yourself a disservice to dismiss advice from your peers because of personal pride.”

When Roger isn’t at work, he enjoys playing video games, making chainmaille, going to all the renaissance faires and comic-cons, and raising ball pythons.