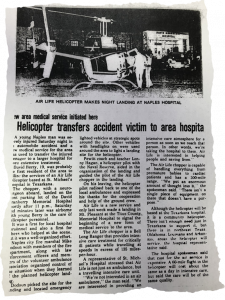 m our first flight on June 18, 1983 when our helicopter flew a 19-year old who had been involved in a traffic accident, LifeNet Air has pioneered providing air medical transport across Arkansas and Texas.

The path to that first flight, however, started well before June of 1983.

When Don Ruggles lost his son, Tony, due to a fatal hunting accident in rural Arkansas, he recognized the need to find a way to expedite the speed at which patients could receive appropriate medical care at the right hospital.

Not long thereafter, Don was at Bell Helicopter, where he met Roy Morgan, who had just founded Air Methods. The two discussed medical helicopters, and Don realized there was a strong possibility that his son, Tony, would still be alive had a helicopter been available to transport him for quicker medical care.

With the help of Roy Morgan, St. Michaels Hospital, and others, Don worked diligently to bring the first full-time air medical service to the state of Arkansas so that flights like that first flight in 1983 would be available.

Since then, LifeNet has expended our flight program to include helicopters based at both the Texarkana and Hot Springs Regional Airports. Additionally, we have a fixed wing plane also based in Texarkana. Combined, the programs fly more than 480 patients a year. 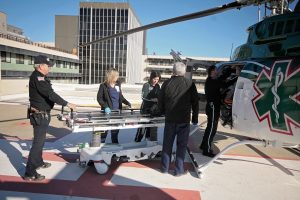 The air medical program provides interfacility transports for patients needing critical patient care via our helicopters and fixed wing, while also responding to scene flights and other medical calls where time is of the essence.

With nearly 40 years of air medical experience and nearly three decades of providing ground emergency medical service, LifeNet has always been committed to putting the patient first. We have quality management programs in place to control risks and ensure the safety of our patients.

We are proud to say, the LifeNet Air helicopter EMS program has safely transported more than 15,000 patients.

One of the ways we have accomplished this is by ensuring our Bell 407 helicopters are equipped with industry leading safety features, including:
Night Vision Googles, XM Satellite Weather, Terrain Avoidance Warning Systems, GPS Navigation, and Satellite Tracking.

LifeNet Air offers free classes for first responders.  Classes can be scheduled by calling 903-556-0301 or by emailing pr@lifenetems.org.