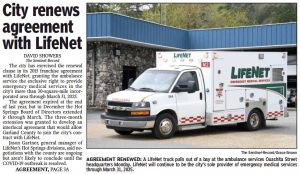 The city has exercised the renewal clause in its 2015 franchise agreement with LifeNet, granting the ambulance service the exclusive right to provide emergency medical services in the city’s more than 30-square-mile incorporated area through March 31, 2025.

The agreement expired at the end of last year, but in December the Hot Springs Board of Directors extended it through March. The three-month extension was granted to develop an interlocal agreement that would allow Garland County to join the city’s contract with LifeNet.

Jason Gartner, general manager of LifeNet’s Hot Springs divisions, said negotiations with the county are ongoing but aren’t likely to conclude until the COVID-19 outbreak is resolved.

Licensing ambulance service was reserved exclusively for cities prior to a 2017 law that extended the authority to counties. They, too, can now grant exclusive rights and stipulate standards and rules equal to or greater than those mandated by the state.

LifeNet serves unincorporated Garland County but the service is not governed by an agreement. It has an agreement with the Hot Springs Village Property Owners Association to serve the Village. LifeNet has had the exclusive right to provide emergency medical services in the city since September 2005. It was the only contractor to respond to the city’s request for proposals in 2014.

“We have had continued discussions with them,” Gartner said of the county. “I think they’ve been positive. We’re not to the point of putting anything on paper as far as an agreement. There’s a lot of discussions about making sure both parties are agreeable to concepts about locations, ambulances and staff, all the big components of an agreement.

“I think we’re pretty close, but the COVID-19 situation is taking everyone’s focus. We probably won’t make a whole lot of progress until we get past this.”

LifeNet must have at least four licensed paramedics and an advanced life support aeromedical helicopter at the ready at all times.

A one-time 5% increase in LifeNet’s fee schedule will take effect on April 1. Annual fee increases tied to the Consumer Price Index will be applied Jan. 1 during each year of the contract, guaranteeing a minimum 1% annual increase should the CPI fail to rise by 1%.

The board also amended the fire department’s service reimbursement policy, removing first responder fees associated with patient care the department provides in tandem with LifeNet. The fee category was added in 2005 in anticipation of insurers reimbursing fire departments for patient care, but the insurance industry never adopted the policy.

The fees have instead been borne by patients.

“These fees have proven to be unpopular with the public and have often stained an otherwise successful response by the fire department,” the department said in its request to repeal the fee.