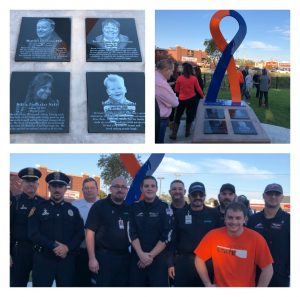 October 2018 marked the three year anniversary of the Stillwater homecoming parade tragedy. On the 26th of October, the Stillwater Strong Memorial was unveiled with many of the patients and first responders who were there that day, including staff from LifeNet’s Stillwater Division, in the audience.

On October 24, 2015, four attendees at the OSU homecoming parade were killed and 50 were injured when a vehicle plowed into the crowd gathered along the route. The Stillwater Strong Memorial honors the four lives lost and the many lives forever changed.

Killed in the crash were Marvin Stone and his wife, Bonnie Stone, Nikita Nakal, and Nash Lucas.

The memorial is located at the corner of Hall of Fame and Hoke Street in Stillwater, Oklahoma.