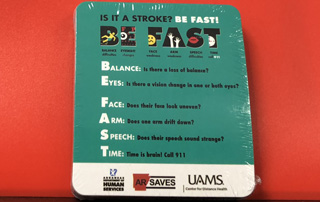 On average, someone in the United States suffers a stroke every 40 seconds, many with catastrophic results because people failed to recognize the symptoms quick enough to get treatment.  To improve community awareness, LifeNet EMS is setting up “Stroke Zones” at several area high school football games starting this Friday night at Panther Stadium in Fouke, Arkansas.

“Stroke is not only the leading cause of death but also the leading cause of serious, long-term disability, in the country,” said Tina Bell, Director of Public Relations for LifeNet. “Many people simply do not know the warning signs and importance of getting help immediately.  Our goal is to help raise awareness at the football games.”

Through a partnership with Arkansas Saves, LifeNet will be distributing BEFAST Magnets to football fans.  Additionally, there will be a game area where people can learn about the serious long term effects of stroke starting at 6:30 p.m. and going through half-time of each game.

“BEFAST is a mnemonic that stands for Balance, Eyes, Face, Arm, Speech, and Time.  Each pocket sized magnet we will hand out not only has these letters on it, but it also has a brief description of the symptom or step to take when you recognize someone may be having a stroke,” Bell said.  “Additionally, we will setup a football themed table game where participants will get to experience what it is like to play the game with various disabilities related to stroke.  Our goal is for people to understand the true importance of learning the signs and symptoms to prevent these disabilities from happening.”

“Because the partnership for the magnets comes through Arkansas Saves, we are only targeting schools in Arkansas this year, but anyone wanting a BEFAST magnet for their fridge can come by LifeNet and pick one up in our lobby,” Bell said.  “Stroke is a real problem in our community.  Every year more than 1200 people in Arkansas alone die from stroke.  It’s important for people to know if they even think someone is having a stroke to call 911 immediately.”

According to the Stroke Association, a stroke occurs when a clot blocks the blood supply to the brain or when a blood vessel in the brain bursts.  Anyone, regardless of age, can have a stroke.  When this happens, brain cells don’t get the blood and oxygen that they need to survive and nerve cells stop working within minutes, affecting the part of the body they control.  Immediate treatment has been shown to minimize the long-term effects of a stroke and even prevent death.