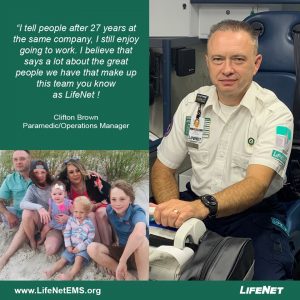 Clifton has worked for LifeNet since 1992 and currently serves as the Operations Manager overseeing Red River County, Texas. He also works part-time as a flight medic on LifeNet Air.

“I became interested in EMS when my sister began dating a paramedic. I always thought I would do something healthcare related, and after listening to his adventures, I felt this was the job for me,” he said, describing how he got into emergency medical services (EMS).

The thing Clifton enjoys most about his career choice is the feeling he gets helping a person in need.

He also enjoys working at LifeNet.

“I tell people after 27 years at the same company, I still enjoy going to work. I believe that says a lot about the great people we have that make up this team you know as LifeNet,” Clifton said.

When he isn’t at work, Clifton enjoys spending time with his wife, their grown children, and their grandchildren. He also enjoys hunting and fishing.