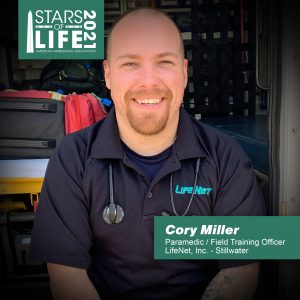 Cory Miller has been named the 2021 Star of Life for LifeNet, Inc. in Stillwater, Oklahoma.

Cory started his career in EMS after being laid off in 2008 from his job painting airplanes for Cessna.

“Since I was unemployed, the state said I could go to a tech school. I chose EMT school, but I’m not sure why. My dad is a retired police chief and my mom has always worked in the hospital. She was an EMT for a long time,” Cory said.

After finishing the EMT program at Coffeyville Community College, Cory decided to also complete the EMT-Intermediate program at the school.

“When I graduated EMT-I, I started working at Coffeyville Regional Medical Center in the ICU before deciding I wanted to go to paramedic school,” Cory said. “At the time, I thought I wanted to become a flight paramedic. Additionally, I was working as an EMT instructor at the community college when they found out they had to start a paramedic class or lose their accreditation. I was one of three paramedic students in that class.”

In 2013, Cory graduated the Paramedic program and contemplated moving to Dallas, Texas to work as a paramedic, but he landed in Stillwater, Oklahoma instead.

“I had a bunch of friends attending college at Oklahoma State University, so I stopped here and basically never left,” he said.

Since starting work for LifeNet in November of 2013, Cory has dedicated his career to making a positive difference in the lives of his patients and coworkers.

“I enjoy dealing with the sweet old ladies,” Cory said, when asked to describe his favorite type of call. “I like hearing stories and making conversation with people who have been around for a while. I especially like getting to converse on the way to the hospital with the people who have grown up in Stillwater about how much the town has changed.”

“I enjoy the FTO position because it allows me to help mold new paramedics and show them different things. I enjoy the leadership aspect of it,” Cory said.

His advice to others just getting started in EMS is simple: “Never stop studying or learning new things. It’s an ever-evolving career path with new medicines and new technologies.”

Cory was nominated for the Star of Life honor by his peers for his dedication and commitment to the company.

“Cory has been a dedicated paramedic, FTO, and certification instructor at LifeNet for several years. He is consistently positive and motivated. Cory has saved countless lives on-duty as a paramedic and is always willing to help others as a friend while off. He is a good person,” one person wrote in a nomination letter.

“Cory exemplifies what it means to be a Star of Life. Each day he goes above and beyond to ensure he not only does what is required of him, but he also goes the extra mile to help those around him succeed. Cory’s leadership skills and ability to motivate others are reflected in the countless lives of the team members to whom he has become a mentor. It is clear he has a passion for EMS, helping others, and living a life of service. Without his guidance and mentorship, our company would not be the same,” another colleague wrote.

In addition to his EMS certifications, Cory is also a BLS, PALS, and EVOC instructor.

When he isn’t at work, he enjoys spending time with his family. He married his wife, Heather, in 2016, and they have two daughters, Drew and Rori.