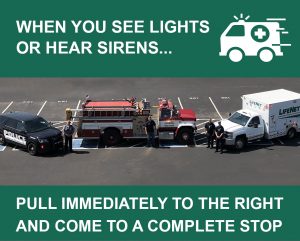 People often forget what they are supposed to do when they hear sirens or see emergency vehicle lights in their rearview mirror.  Local emergency response officials want to help decrease the public panic and ensure everyone knows the role to play in emergency situations.

For starters, there are only two steps you need to remember as emergency vehicles approach.

“When you see lights, you should pull immediately to the right and come to a complete stop,” said Perkins Deputy Police Chief Steve Hensley.

A big misconception for drivers around pulling over happens driving on multilane highways.

“One thing that often confuses the public is what to do when they see an emergency response vehicle coming down a four lane highway. When a highway is not divided, meaning there is no median, both directions of traffic are supposed to stop when they see lights. That includes stopping for school buses,” said Hensley.

Not only is it Oklahoma state law to follow these recommendations, it is also important for the safety of others in the community.

“My concern when we are going to an emergency scene is I don’t want to cause another emergency scene getting there.  I think people see the emergency vehicles, but people also have to be aware of the other drivers as well.  Sometimes people pullover and stop, but they also stop paying attention to the other traffic, and that can’t happen,” said Perkins Fire Chief Joe Barta.

In addition to understanding what to do when emergency lights or sirens come up behind you, it is also important to understand what to do if you encounter emergency response professionals working a scene while you’re driving.

“When you see police cars, fire trucks, or ambulances on a scene, you need to slow down if you cannot get into another lane,” Hensley said.

Another thing that often confuses people is seeing an emergency response vehicle go through an intersection with flashing lights, only to see the lights turned off a short time later before the vehicle arrives on scene.

“LifeNet ambulances only run lights and sirens when we are dispatched on a priority one or two emergency response call.  This most often means the original call has come in as something life-threatening like a stroke, motor vehicle accident, or sudden cardiac arrest,” explained Zach Harris, Director of Operations for LifeNet. “There are times when our call might get downgraded based off of feedback from other first responders.  When this happens, we turn off lights and sirens and continue on the call.”

One of the most dangerous places to encounter an emergency response vehicle is in an intersection.

“If you are already in an intersection when you see our lights or sirens, clear the intersection and stop until the emergency vehicle passes,” Harris said. “If you are at a red light and cannot move over to the right, wait until it is safe to do so when the light changes to green and traffic starts moving.  Don’t attempt to move over to the left while stopped because you can’t move to the right.  This only causes more of a problem.  Safety is a priority for us, and that includes the safety of the general motoring public.”

The important thing to remember is that no matter how big of a hurry you are in to get somewhere, when lights or sirens come on behind you, taking time to yield right away can make the difference between life and death for someone else in an emergency situation.