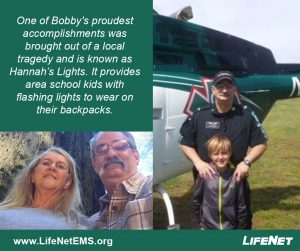 Bobby has been with LifeNet since 2005 and is currently a Flight Medic for LifeNet Air 2 in Hot Springs, but his career in EMS started much earlier.

He started in EMS in 1979 as the first EMS Dispatcher in Hot Springs while still in high school. He became an EMT in 1980 and a paramedic in 1987. On his days off, he works as Deputy Director of Emergency Management for Garland County and as a County Communications Officer. He has also been a volunteer firefighter in Garland County since 1980 and is currently a Battalion Chief for 70 West Fire Department.

Bobby is married to Sharon.  In his spare time, he enjoys being involved in Amateur (HAM) Radio as President of the Spa Amateur Radio Club.  He also likes to take at least one cross country road trip a year.

One of Bobby’s proudest accomplishments was brought out of a local tragedy and is known as Hannah’s Lights, which honors the memory of a local child killed in a school bus accident by providing area school kids with flashing lights to wear on their backpacks.  The program was honored with an AMBY Award by the American Ambulance Association for “Best Community Impact Project”.