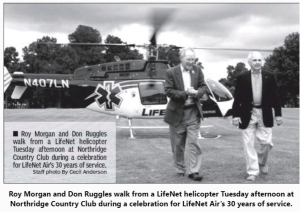 LifeNet Air landed on the grounds on Northridge Country Club on Tuesday evening to a celebration. LifeNet employees, patients who’ve been helped by the service and those involved in its creation were on hand to celebrate 30 years of service. “Today marks the 30th anniversary of the first helicopter flight we made. We flew down to pick up a patient in Naples, Texas, and flew him back to St. Michael,” said David Baumgardner, LifeNet executive director. “We’re marking 30 years of continuous service to the community.”

LifeNet Air, formerly known as Air Life, has made a big difference to area patients who’ve received traumatic injuries in an accident or are gravely ill.

“They have access to care they might not have had,” Baumgardner said. “With the helicopter you have a flight nurse and a flight paramedic, and with that kind of speed and equipment it’s like a flying ICU. You can transport the patient quickly and reliably to another facility. It really expanded the type of care a person might get in the area.”

When someone experiences traumatic injuries or serious illness, receiving timely treatment can make the difference between life and death and LifeNet Air cuts travel time substantially.

“If you were injured in an accident in Naples, it might take an hour-and-a-half coming in by ground ambulance but that flight is 20 or 25 minutes,” Baumgardner said.

Don Ruggles was one of the driving forces in LifeNet Air’s inception. His son Tony Ruggles lost his life after a tragic hunting accident. “Had we had something like this he would probably still be living. It took 10 hours before he had definitive medical care,” Ruggles said.

Inside the helicopter is a plaque that reads “… dedicated to the memory of Tony Ruggles and in honor of his father Don Ruggles.”

Ruggles is proud of the impact LifeNet Air has had on the community.

“I don’t know the number we’ve flown but it’s in the thousands … I’d like to say I’m proud for our community in supporting this helicopter program for the last 30 years. It’s been a community effort and I’m very proud of that.”

CHRISTUS St. Michael also had a huge part in getting the program started. “Don worked so hard to make this program a reality. To see where it’s come now is amazing,” said Francine Francis, St. Michael communications director. “The community is still benefiting 30 years later.”

Ashley Young had a head-on collision in Genoa in 2011 that left her with a broken body.

“I was basically hurt from head to toe … and I had a traumatic brain injury,” Young said.

LifeNet Air transported her from the scene of the accident to LSU Health in Shreveport, La.

“Texarkana has two really good hospitals but you need … surgical services right then to handle her injuries,” said Michael Baker, the LifeNet critical care flight paramedic who took care of Young. “Due to her injuries she had to go to a Level 1 trauma center. Her injuries were on the upper end of what we see. People with injuries worse than hers, most of them don’t make it.”

Baker said Young wouldn’t have survived if LifeNet Air hadn’t been available and she’d been transported by ground ambulance.

Another former patient, 7-yearold Catherine Joyce, attended the event. She was transported by LifeNet Air to Arkansas Children’s Hospital last year after she was bit by a rattlesnake at her family’s hunting lodge in New Boston, Texas. Close to losing consciousness before leaving the hospital in Texarkana, the ordeal was terrifying for her family.

“Her eyes were shutting … It was extremely scary,” said Gene Joyce, Catherine’s father.

Antivenin was administered to her on the flight to ACH and by the time her family arrived at the hospital in Little Rock, Catherine was sitting up in bed.

“We’ve been with them 30 straight years. We were their second partner and now they’re probably the largest (air) medical provider in the United States,” Baumgardner said. “They’ve been a pretty good partner through this whole deal. Not many business partnerships last that long.”