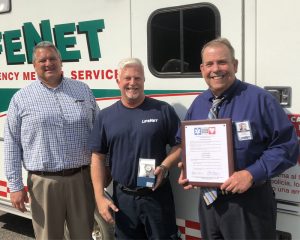 During our Annual EMS & First Responders Appreciation Dinner tonight in Hot Springs, AR, LifeNet Paramedic Terry Childers was honored for being selected as a Star of Life. He was presented the award by LifeNet CEO David Baumgardner and Board Member David York.

Nominated for Star of Life
A paramedic at LifeNet, Terry received several nominations for the annual honor that is bestowed upon the best and brightest of EMS professionals, including:

History in EMS
Terry originally decided to become a paramedic because he thought it would be an exciting and fast-paced career. After 27 years in the business, he affirms that he was right. Terry has served patients, their families, and his coworkers in many roles over the years, and says he has learned from some of the best providers in Arkansas.

Terry has managed both ground and flight programs, served as educator, and functioned as mentor to innumerable EMS professionals over the years.

Terry admits that the main reason for his long tenure in EMS is the personal gratification he feels when caring for patients. While he acknowledges the critical impact he and his peers have played in life-saving moments, Terry relishes the ability to make someone’s day better by providing a moment of comfort, or just by listening to their stories. He confesses that patients probably do not realize that caring for them contributes as much to his well-being as he hopes does the role he plays in their lives.

When not at work, Terry finds time for balance in life by relaxing on the lake. He is also renovating a 103-year-old house and, during breaks, enjoys sitting on his front porch with Leroy, his bulldog, who is a celebrity of sorts among his EMS community.

The Stars of Life program celebrates the contributions of ambulance professionals who have gone above and beyond the call of duty in service to their communities or the EMS profession. Stars of Life recognizes the dedication of these heroes while shining light on the critical role EMS plays in our health care infrastructure.

During his time in Washington, Terry will meet with members of Congress and congressional aides to discuss legislative issues critical to emergency medical services.