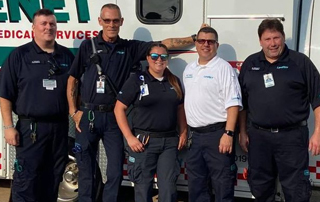 Both the Morris County Commissioner’s Court and Daingerfield City Council agreed to a contract with LifeNet in March, after CHRISTUS EMS gave notice of their intent to move out of the area in December of last year.  LifeNet then worked to establish a realistic timeline for the transition to take place.

“We are happy with how our first day of operations went in Morris County, and we look forward to serving the area for many years to come,” said David Baumgardner, CEO of LifeNet, Inc.  “Most of the EMTs and paramedics we have servicing the area are from Morris County, so residents will continue to see familiar faces wearing new uniforms.”

LifeNet has named Shon Matthews as the area manager who will oversee LifeNet’s operations in Morris and Cass Counties in Texas.  Matthews not only has many years of experience working for LifeNet as a ground paramedic, flight paramedic, and operations manager, but he has also won several awards throughout his career in EMS including the 2019 Star of Life Award and the 2019 Stewards of the Community Award.

LifeNet is operating two ambulances posted in Daingerfield to cover the county, posting in the same location CHRISTUS EMS used.

“We plan to reevaluate the call volume after 90 days and may acquire a second post elsewhere in the county if the data shows it is needed,” Baumgardner said.  “We believe in putting the patient first in every decision we make, and that includes ensuring we have adequate coverage across the county where it is needed most.”

“A LifeNet Membership helps reduce the out-of-pocket expense someone might be responsible for in the event they’re transported by LifeNet,” said Baumgardner.  “It’s not uncommon for an insurance to deny a claim entirely, in which case, we reduce the member’s bill by forty percent.  If insurance pays any portion of the bill, we accept that as payment in full.  That means the member doesn’t have to worry about coinsurance, copays, or deductibles.”

LifeNet offers three levels of membership: Ground Only, Air Only, or Gold.  The Gold Membership covers an entire family for transport by a LifeNet ground ambulance, by the LifeNet Air 1 helicopter based in Texarkana, Arkansas, or by LifeNet’s fixed wing plane, also based in Texarkana.

In addition to Morris County, LifeNet provides ground ambulance service in Bowie, Cass, and Red River Counties in Texas and for the City of Denison, Texas.  Additionally, LifeNet operates in Miller, Garland, and Hot Spring Counties in Arkansas and in Payne County, Oklahoma.