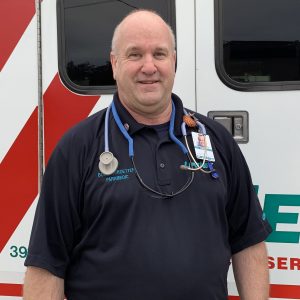 Robert “Bob” Flotkoetter, a LifeNet paramedic and 12-year veteran of the U.S. Air Force, was hospitalized in April after contracting COVID-19.

“I went to the ER, and that’s the last thing I really remember,” he said. “Twenty-one days later, I woke up in the ICU after being removed from the ventilator.”

Flotkoetter’s wife is a registered nurse who was unable to visit her husband in the hospital because she was diagnosed with COVID-19, fighting her own battle to get well at the couple’s home. So Flotkoetter’s mom stepped in via phone from Montana to help communicate daily with doctors about his care.

“There is a code that authorizes hospital staff to communicate with others on your behalf, and my mother had it. She is a retired nurse, and she called every day wanting numbers. That was one of the real pluses,” Flotkoetter said.

A native of Montana himself, Flotkoetter has worked in LifeNet’s Texarkana Division for the last eight years. He personally knew the nurses who were taking care of him at the hospital, though he doesn’t remember most of the care he received in the ICU.

“It was one of the scariest things in the world. Something was going on, and I couldn’t control it. But I had very great care by the hospital staff and nice nurses,” he said. 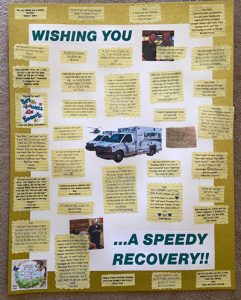 One of his nurses, Haylee McKnight, is also an EMT at LifeNet. She asked her hospital supervisor if she could coordinate having LifeNet staff members make a card to put up in Flotkoetter’s room for him to see when he woke up. The card was one of three cards that greeted him when he came off the ventilator.

Flotkoetter noted that several LifeNet crews also tried to come and visit him in the ICU when they finished dropping off patients. However, since COVID-19 patients aren’t allowed visitors, they were not permitted.

Being hungry is a vivid memory Flotkoetter has of waking up in the ICU.

“The nurses knew that I was hungry because I was eating anything I could find. Finally, I just said I’m posting online ‘someone bring me a sandwich’,” Flotkoetter said.

Flotkoetter was released from the hospital on April 21 and is currently undergoing rehabilitation at home.

“Things are headed in the right direction,” he said, adding he hopes to be back on an ambulance treating patients in the next month or so.

His wife has also made a recovery from COVID-19.

When asked if this experience would change the way Flotkoetter views his job as a paramedic, he said “No”.

“It really hasn’t changed my role as a paramedic because that is saving lives,” he said, before adding, “I will be a little bit more careful about possibly bringing things home to my wife.”

Flotkoetter does have one thing he hopes the public will heed from his experience.

“I want people to know just be safe. If you start to have shortness of breath, dial 9-1-1 right away. That’s one of the big kickers with COVID-19, shortness of breath and fever. Don’t be afraid to call 9-1-1. We are still here to help you out.”