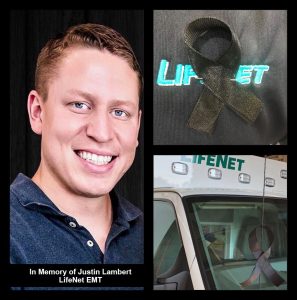 On October 8, 2019 we learned about the unfortunate passing of one of our own. LifeNet Paramedic Darren Cowley had worked in our Texarkana Division since August of 2011.

Prior to starting his career at LifeNet, Darren was a first responder, who we could always count on to render great patient care until we arrived on scene.

Darren started his career with us as an EMT and became a paramedic three years later. Throughout his career at LifeNet, he served throughout our Texarkana Division and was an inspiration to many EMTs as they were starting their career and did their clinical third-rides with him at LifeNet. Later in his career, Darren became an instructor with the Paramedic Program at Texarkana College, where his influence and legacy will live on in the numerous paramedics he helped train for both LifeNet and other EMS programs in the region.

Darren’s dedication to his patients and colleagues earned him the honor of being named LifeNet’s 2014 Star of Life. This honor is only bestowed upon one EMS professional in the Texarkana Division each year. As part of the honor, Darren represented our company in Washington D.C. that same year during the American Ambulance Association’s annual Stars of Life event.

Cowley was known by his peers as a leader, a friend, an amazing instructor, and an all-around good person to know. He leaves a hole in the hearts of those he worked with that will never be filled. The memories of his friendship and compassion, along with his legacy as a leader in EMS education, will help heal our hurt as time goes on and we mourn his passing.

Darren was born August 28, 1986 in Texarkana, Texas to Robert DeWayne Cowley and Linda Gail Cowley. He was a Paramedic with LifeNet and an Instructor of Emergency Services for Texarkana College. He was a member of Brothers Keepers Motorcycle Club and Avery First Baptist Church.

He is preceded in death by grandparents, Dewie Davis and Lloyd and Sylvia Cowley; one son, Walter DeWayne Cowley; and one sister, Kaitlyn Hollowell.