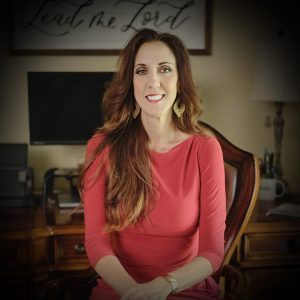 Alyssa Haley was named the Director of Finance for LifeNet in November 2021. In this role, she oversees the administrative, financial/financial planning, and accounts receivables operations of the company and works out of LifeNet’s headquarters in Texarkana, Texas.

Originally born in Burnett, Texas but raised in Alabama and Oklahoma, Alyssa’s leadership style, business acumen, and southern charm make her a strong asset to the LifeNet team.

After graduating high school, Alyssa started nursing school at Oklahoma City University, but a desire to relocate to a smaller town changed her career trajectory.

“I had visited Texarkana several times, and I decided I wanted to move there.  I transferred to Texarkana College.  Unfortunately, it was going to take one year to get into the nursing program, so I took business classes in the interim,” Alyssa explained. “I ultimately graduated from Texas A&M University – Texarkana with a Master of Science in Business Administration.”

While in college, Alyssa worked in the financial aid office full time until she became pregnant with her second child.

When Alyssa came back to the workforce, she went to work as an Accounting Specialist and Compliance Officer at a local credit union before a friend of hers introduced her to an opportunity to serve as the Health Resources Coordinator for a local hospital.

“While in my role at the hospital, I was able to introduce the local resources in the community to the patients coming in the hospital. I also was put on the project for the Northeast Texas Health Information Exchange and did a lot of consulting for the community on various healthcare projects,” she explained. “Unfortunately, the position was grant funded at the hospital, and the grant eventually ended. Luckily, I was an adjunct instructor in the business department at Texarkana College teaching management and marketing classes.”

Shortly thereafter, Texas A&M University-Texarkana recruited her back to her roots, but this time as the Director of Financial Aid and Veteran Services. She also had the opportunity to serve as an adjunct professor for the leadership classes for the incoming freshman.

In the fall of 2014, Alyssa was given the opportunity to work for a local eye doctor as his Chief Operating Officer and Chief Financial Officer.  When she started, she oversaw roughly eight different businesses for him.

“He was a serial entrepreneur.  When I started, the eye practice had three clinics in two states.  Over the next five years, we expanded to 9 practices in three states. I did have to give up teaching as an adjunct professor because I didn’t have time.  We would fly all over the United States with the different business ventures he was involved in. I was exposed to a whole different side of the business world,” Alyssa said.

A lifelong learner, Alyssa wasn’t content sitting in business meetings with others around her who had more real-world business knowledge at the time than she did.

“I earned certifications from the Harvard Business School in Disruptive Strategy and Finance,” she explained.  “We looked at real world case studies of multi-billion-dollar companies and gave them ideas to expand their business.  I worked on teams with entrepreneurial people in what was in essence a big think tank.”

Soon thereafter, Alyssa was able to put into practice what she learned at Harvard Business School. “One of the most exciting aspects of my career there was getting to coordinate the sale of the eye practice to a private equity firm,” said Alyssa.

Alyssa credits mentors early in her life for helping her grow professionally, and she carries that “pay-it-forward” attitude with her today.

“I was lucky in my early 20’s to work for companies who offered mentorship programs or who had individuals willing to cater to a young me wanting to learn more and more and more.  Now I am in roles managing people, and I believe it’s my responsibility to help grow and develop them,” she said.

After the eye clinic she worked for sold, Alyssa started her own business doing accounting, billing, credentialing, and consulting for smaller medical practices.

“It grew quickly.  Everything was good, but I missed being a part of larger organizations who had a purpose and an impact on people,” she said.  “When the LifeNet position came open, I saw an opportunity to step away from the consulting and get back involved in something aligned with the purpose I was missing.  I had a true peace about stepping away from the business and taking this opportunity.”

When Alyssa isn’t at work, she’s passionate about the women’s ministry at Oasis Community Church in Texarkana. She enjoys antique shopping, painting and refinishing furniture, completing small woodworking projects, and cooking from scratch.  She also enjoys being outdoors. She’s married to Robert, and they share five children.