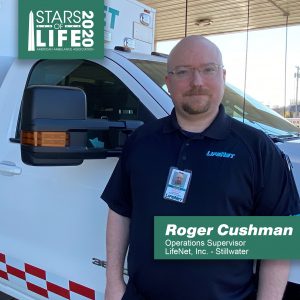 Roger Cushman has been named the 2020 Star of Life for LifeNet, Inc. in Stillwater, Oklahoma.

Cushman’s career path in Emergency Medical Services (EMS) can be attributed to his years of service in the United States Army National Guard from 1999-2008.

During his time in the National Guard, Cushman was always looking for promotion opportunities.

“In order to advance, you have to look for open slots.  I originally enlisted in field artillery, but there wasn’t a lot of potential there, so I changed jobs several times chasing promotions.  I changed from field artillery to cook to administration to medic.  The medic job worked for me.  I just really enjoyed doing it.  I found my niche I suppose,” he said.

After leaving the military, Cushman knew he wanted to continue a career as a paramedic, so he went back to school to obtain his certification.

“I worked on a volunteer ambulance service in Medford, Oklahoma first.   While working for them, I also worked as a police officer in the area.  I worked in the sheriff’s office as a dispatcher/jail administrator.   During this time, I picked up a lot of responsibilities as a court clerk, in emergency management, and a lot of other things.  That was a big reason for me coming to LifeNet.  I felt like I had too much on my plate, and I wanted to pare down,” he said.

Cushman started work at LifeNet, Inc. in October of 2017 and was name and Operations Supervisor in December of 2018.

“I like working for LifeNet because it’s not as busy as Oklahoma City or Tulsa, but it’s still a large variety of calls to keep a person interested.  It’s busy enough to where you’re working different calls, so you don’t get bored, but you’re not overwhelmed either,” he said.

Cushman’s favorite type of call to run in EMS is trauma.

“That’s what I did in the military.  I am a very average paramedic for most things, but when it comes to trauma, I feel like that’s where I shine,” he said. “As a supervisor, what I hear from crews is I don’t sit on problems.  I like to solve problems.  It’s the same with being a paramedic.  You see a problem and you want to fix I problem.  I feel like I’m good at fixing those problems.”

For others considering a career in EMS, Cushman offers this advice: “Be open and accepting of criticism.  Paramedics are very prideful of our knowledge, and some might call us arrogant.  Having that arrogance makes people shutdown to criticism.  Those type of people struggle in EMS.  Being open to suggestions helps you grow.”

When Cushman learned he had been named the 2020 Star of Life for the Stillwater Division, he was surprised.

When he isn’t at work, Cushman enjoys playing video games and making chainmail jewelry.  He is married to his wife, Megan, and they have three children, Avalon, Cortana, and Dexter.