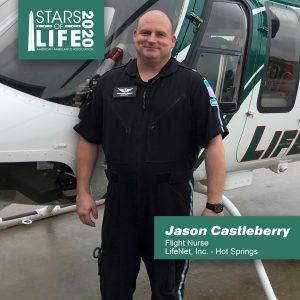 Jason Castleberry has been named the 2020 Star of Life for LifeNet, Inc. in Hot Springs, Arkansas.

Castleberry attributes the start of his career in emergency medical services (EMS) to stories a high school friend told him that inspired him to dedicate his life to serving others in the out-of-hospital care setting.

“When I was in high school, there was a guy who got to ride as an observer on the ambulances because his father was a police officer.  He would come to school and tell my best friend and me all about what he did.  After high school, my best friend and I signed up to go to nursing school.  We took our classes for the first semester and didn’t like it.  We remembered the stories that guy had told us, and we both transferred over to the EMT/paramedic program,” Castleberry said.

Because of his age at the time, Castleberry couldn’t immediately work as an EMT on an ambulance, but his instructor at Henderson State University allowed him to do paramedic school at the same time he was working on his EMT certification.

“The instructor just kind of broke the rules and let me take both classes concurrent. I tested for my paramedic just a few months after I tested for my EMT.  That worked out better because back then you had to be 21 to drive the ambulance, and I could work as a paramedic on the ambulance at 19 and not have to drive,” he said.

“I owned an asphalt seal coating company at that time.  Another paramedic friend of mine at LifeNet was named the director of the air program for LifeNet Air in Texarkana. He helped me get on there, and I was working full-time as a flight paramedic about a month later,” Castleberry said.

While working as a flight medic, Castleberry made the decision to go back to nursing school.  He completed the paramedic to nursing bridge program in Malvern, Arkansas, at what is now called Arkansas State University Three Rivers.

Castleberry flew for LifeNet Air 1 in Texarkana for seven years as a flight paramedic/nurse, until the LifeNet Air 2 base was opened in Hot Springs, Arkansas.  Since November of 2013, he has worked on the helicopter at the Hot Springs Base.

This year marks Castleberry’s 25th year working in EMS, and two words describe what he enjoys the most about his career: “helping people”.

“I like being able to make a difference in their outcomes.  I enjoy trying to bring some calm to the chaos that is going on in their life,” he said.

While Castleberry enjoys every aspect of EMS, his favorite calls to respond to are trauma related.

“I feel like those are the calls where you have the ability to fix the patient and help them.  If it’s an MI or a stroke, for the most part, you are transporting those patients.  For severe trauma patients, you can actually make a significant difference in their outcome,” he said.

For others considering a career in EMS, Castleberry offers this advice: “Just do it.  If you have any interest at all, you should dive into it and see if you like it.  Involve yourself in it and see if it fits.  It’s not for everyone, but the people who are really drawn to it know that it’s the career for them.”

Castleberry was nominated for Star of Life by his peers and selected by a committee of former Stars of Life at LifeNet, Inc.

Some of the words written in his nominations included:

When Castleberry learned he had been named the 2020 Star of Life for the Hot Springs Division, he was both excited and surprised.

“I didn’t at all suspect it.  I appreciate it very much because I know that it comes from the employees.  That probably means the most knowing it’s the people that I work with that choose me for this honor,” he said.

In addition to his work on the LifeNet Air 2 helicopter, Castleberry also has his CPR, NRP, and TNCC Instructor Certifications and is a CFRN and FPC.

When Jason isn’t at work, most weekends you can find him at the local dirt track making laps in his IMCA Modified.