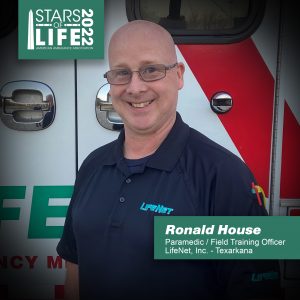 Ronald House has been named the 2022 Star of Life for LifeNet, Inc. in Texarkana, Texas.

Growing up in Hooks, Texas, Ronald was involved in the Boy Scouts.

“That’s what got me into emergency services.  I took a first aid and CPR class for the Scouts when I was 15 that was taught by the Hooks Volunteer Fire Department. They had high school cadets, so I joined the department,” Ronald recalled, talking about his start as a first responder.

A self-proclaimed book- and band-nerd, Ronald graduated in the Top 10 of his class at Hooks High School and headed off to college as a music major.

“I realized it wasn’t what I wanted to do, so I came back and enrolled in criminal justice classes and thought I’d go to work for the FBI.  I also took the EMT program for the fire department,” he said.

When he finished the EMT program, he realized he had found his calling.  He started at what was then St. Michaels EMS (later LifeNet, Inc.) in Texarkana and immediately enrolled in paramedic school.  He became a field training officer (FTO) a few years later and then ran the quality improvement program for the company for several years.

“I was given the opportunity to manage the communications center for two years, but I quickly realized the position wasn’t for me. I went back out to the field and fell in love with my job again,” he recalled.  “Some people want to promote up and be in management.  I just wanted to be a paramedic. Several years ago, I had the opportunity to become a relief operations manager (OM).  I did that for a few years.  I didn’t like it.  I look at my job as a ministry, and I wasn’t able to minister to patients the same way in the OM role.”

Throughout his three-decade career in EMS, Ronald has suffered three burnouts.  Each time, he has taken the opportunity to self-reflect and grow as a professional.

“During one of the burnouts, I realized I needed to take a timeout from training everyone else as an FTO and focus on my own education.  It’s one thing to teach everyone, but it’s another thing to teach yourself,” he said.  “I took a tactical combat casualty care class and the critical care paramedic course. But when a staffing shortage hit a few years ago, I got asked if I would be an FTO again.  I said I wouldn’t give more than three months.  Doing it again, I fell back in love with it, and I haven’t stopped teaching others since.”

Ronald credits his faith in God for helping him find the passion in both his work life and his marriage.

“The more intense my relationship with God has become, the better my personal relationship with my wife has become.  My professional life has changed, too, and I love my job. It’s a terrible job, and you have to see a lot of terrible things.  But my job is my purpose, and I think I’m where I’m supposed to be,” Ronald said.  “I am able to give and receive at the same time.  I’m able to give joy and comfort to folks, and I get lots of laughs.  I love the compassion that God has given me.  I’m not at this level in my job without it.  I feel being a paramedic is one of my gifts that God has given me.  The more I embrace that, the better my job gets.”

Ronald enjoys being an FTO now because it not only helps him grow as he trains others, but it also allows him to install the right attitude in people just getting started in the career.  Part of that attitude is making sure people understand, no matter the reason why someone has called 9-1-1, you’ve been put in their path that day for a reason.

“We never know how many people we may save just because we were nice.  We may feel some of the calls we go on aren’t true emergencies, but we also have to remember, sometimes just by being there, we are the person God used as the answer to avoid their permanent solution for a temporary problem.  Every interaction we have with someone, we have an opportunity to provide a simple act of kindness that may prevent them from doing something that day they couldn’t undo,” he said.  “Just be nice.  It makes such a huge difference.”

Ronald was nominated by his peers to be a Star of Life.

“He has gone above and beyond both as a mentor and a paramedic,” one person wrote.

“He is kind, hard working, and strives to excel,” another person wrote.

“Over the last 30 years, Ronald has not only seen and responded to every type of call imaginable, but he has also never wavered from his commitment to putting the patient first. His sense of humor often brings laughter to his patients, and Ronald isn’t above doing something silly to bring a smile to their face. He knows that showing people he cares for them is often the best medicine he can provide to those he is called to help,” wrote someone else.

“No matter what is going on around him, Ronald shows up with a smile that will warm your heart and a can-do attitude that will make you believe the LifeNet team can truly accomplish anything,” a coworker wrote.

Ronald is married to his wife, Samantha, and they have blended family that includes both grown children and grandchildren.  When he isn’t at work, Ronald enjoys building and tinkering on things, and collecting antique books.