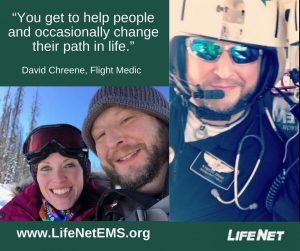 David Chreene has worked for LifeNet since 2002 and is currently a flight paramedic for LifeNet Air 2 in Hot Springs. In addition to flying on LifeNet Air, David also works on the ground ambulance.

“My dad was the chief of a volunteer fire department, so at an early age I was exposed to this type of career. I started running calls,” said David.

He spent time working in the fire service in Louisiana, where he was a paramedic and the captain of his shift.

“Louisiana EMS was fire based. I was wanting to get into a solid based EMS program, so I came to work for LifeNet,” he said.

At the age of 14, David lost his uncle to sudden cardiac arrest. That event inspired him to want to be part of a flight medical crew.

“I’ve always wanted to be on the flight crew, even at an early age. My first call was my uncle who lived behind me, cardiac arrest. The helicopter came in, and I set my sights on it then. Six months after I was hired at LifeNet, I was on the helicopter,” David shared as he explained why he became a flight medic.

Like others in EMS, David enjoys the career because of the ability to help people.

“It’s challenging and makes you think. You do get to help people and occasionally change their paths in life,” he said.

When David is not at work, he enjoys camping, snow skiing, floating the river, and doing other things outdoors. He also enjoys spending time with his wife, Robyn.