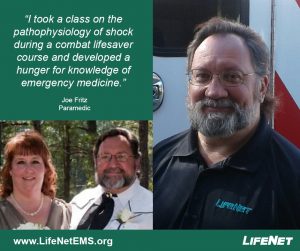 Joe has been a paramedic at LifeNet since 1994 after a class inspired him to go into EMS.

“I took a class on the pathophysiology of shock during a combat lifesaver course and developed a hunger for knowledge of emergency medicine,” he said. “I thought it would be like ‘EMERGENCY!’. I have always liked to serve others, and God opened doors that led me to LifeNet.”

The things he enjoys most about working in EMS are the friendships with his fellow employees and helping people.

“My favorite thing about being a medic is the varying environments in which we work,” he said. “My advice for someone considering a job in EMS is to do some ride-alongs and watch ‘Bringing Out the Dead’”.